PRESS CONFERENCE: The relations of US with its NATO allies

On Monday 9th of July we have organized a press conference with Lieutenant General Benjamin Hodges, the former commanding general of US Army in Europe. 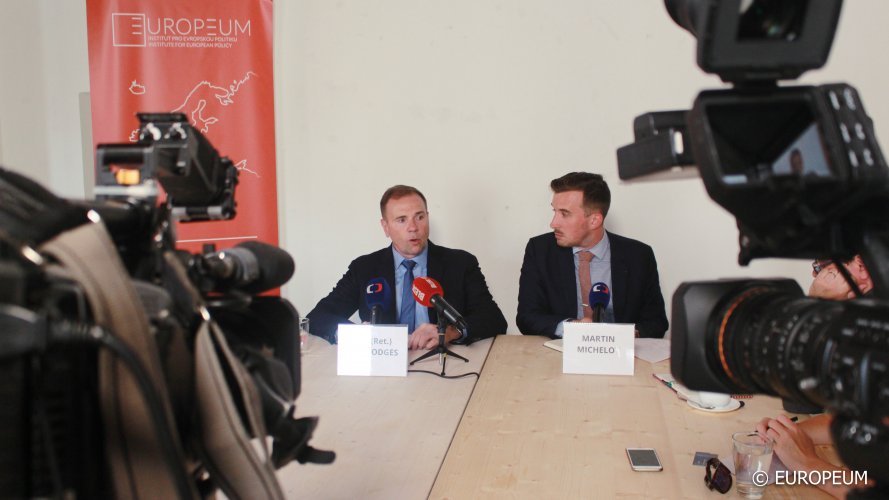 On Monday 9th of July we have organized a press conference with Lieutenant General Benjamin Hodges at the Prague Creative Center. Lt. Gen. Ben Hodges was commander of NATO Allied Land Command (LANDCOM) between the years 2012 and 2014. Since 2014 he was commander of the US Army in Europe (USAREUR) unitl he retired from the Army in 2017. Benjamin Hodges is currently working in the washington-based think tank CEPA (Center for European Policy Analysis). A press conference and briefing with journalists was moderated by our Deputy Director, Martin Michelot.

Lt. Gen. Hodges highlighted the importance of the North Atlantic Treaty Organization, at the same time he stressed that other states should continue in increasing of their defense budget and contribute more to the burden-sharing within the Alliance.

It was a great pleasure and honor to host Lt. Gen. Hodges in Prague. For the footage from the press conference see the archive of the Studio ČT24 (11:40-23:50), pictures are available in our Facebook gallery. Content from the briefing has been published also on the following media outlets: INFO.cz, Týden.cz, PragueMonitor, Euroskop, Czech Radio and Blesk.