Report | Monitoring of the EU's Green Policies: Perceptions and Narratives in the Czech and Slovak Information Space

The European Green Deal is the core of the current climate strategy of the European Union, which has set the goal of making Europe a carbon-neutral continent by 2050. In an effort to monitor and counter disinformation narratives about the deal, IRI's Beacon project launched an initiative called the “European Green Deal: Mapping perceptions in Central and Eastern Europe,” in which six partner organizations studied how the deal is perceived in Bulgaria, Czechia, Poland, Romania, and Slovakia. Our project manager and juniour researcher, Tatiana Mindeková, analyzed narratives spread about the Green Deal and the EU’s green policies through Czech chain emails as well as through selected mainstream media and websites known for spreading disinformation.

Ferenc Németh, a researcher on the politics, security and integration of the Western Balkans, has written a policy paper under the project Think Visegrad in Brussels. In it he examines Serbia's foreign policy towards the European Union after the Russian invasion of Ukraine.

Policy Paper | Trust in the EU in times of crisis: Public perceptions in the Czech Republic in the aftermath of the Covid-19 pandemic

How has the Covid-19 pandemic affected the Czechs' relationship with the European Union? This topic is addressed in a policy paper by visiting fellow Mare Ushkovska. 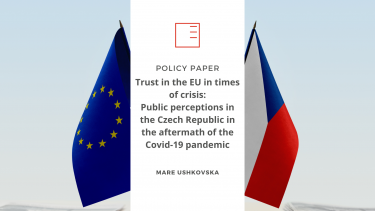 Analysis: Czech Presidency of the Council of the European Union: Enlargement as a strategic decision

Our senior researcher Jana Juzová has written an analysis in which she describes the fact that EU enlargement policy and the EU's south-eastern and eastern neighborhood represent some of the most important areas of Czech foreign and European policy in the last two decades.

Lots of good work, successful, excellent. These are also the terms used by analysts working in Brussels to assess the end of the Czech Presidency of the Council of the European Union. In interviews with ČTK, a trio of experts, including the head of our Brussels office, Žiga Faktor, praised the way the Czech Republic has approached directing the debates between the member states.

Ekonews: Industry will continue to receive part of its emission allowances for free. New allowances for transport and buildings will fall on the people

The European Union's system for trading the emission allowances that polluters receive or buy to produce greenhouse gases will change. NGOs believe the shift will again benefit industry. Our senior researcher Katerina Davidova commented on the issue for Ekonews. 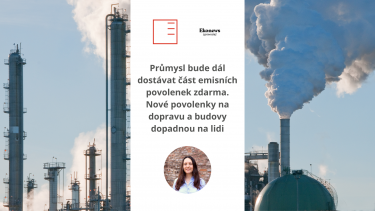 In her EU Monitor, Zsanett Gréta Papp discusses the current energy situation in the EU Member States. Where to look for a replacement for gas from Russia? And how will this decision affect the EU's green policy agenda?

The war in Ukraine and the subsequent economic crisis caused by Europe's dependence on Russian fossil fuels showed Europeans the danger of keeping too tight economic ties to autocratic regimes. However, while Europe is shedding its dependence on Russia, another economic reliance is gaining strenght, namely that of Germany on China. In her blog, our intern Kristina Kropáčková explores the broader context of this phenomenon and its implications for EU cohesion. 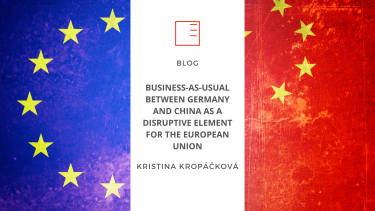