INVITATION: Implications of the Russian Invasion of Ukraine for the Western Balkans: Challenges and Options for the Czech Presidency

The EUROPEUM Institute for European Policy, the Balkans Policy Advisory Group (BiEPAG) and the European Fund for the Balkans (EFB) invite you to a public conference on the Balkans and its politics at the event entitled: Consequences of the Russian Invasion of Ukraine for the Western Balkans: Challenges and Opportunities for the Czech Presidency. The debate will take place on 11 May 2022 at 18:30 at Impact Hub K10, Koperníkova 10, Prague 2 - Vinohrady, 120 00. 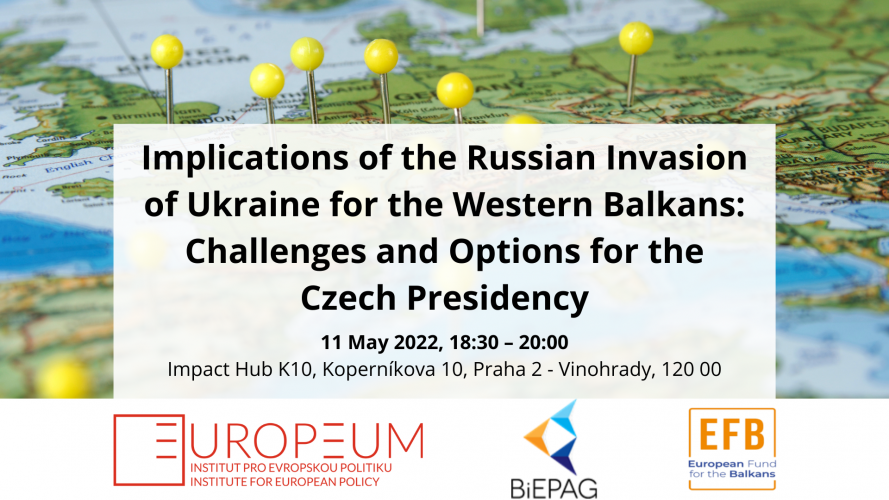 The attention of Europe is now focused on the East in the aftermath of the Russian invasion of Ukraine. While the leaders of the European Union are discussing the implications for  European security, energy, and the future of Eastern Europe, the current crisis has a serious impact also on the Western Balkan countries and their prospects. The Czech Republic’s Presidency of the Council of the EU, starting in July 2022, will have to react to this changed reality. What consequences does the war in Ukraine have on the Western Balkans? How does it affect their European perspective? And how can the Czech Republic balance react to the current crisis with its long-term commitment to the Western Balkan’s European integration?

The debate will be held in English.