Profit or perish? Hungary and the Czech Republic’s response to the refugee crisis

How politicians in the Czech Republic and Hungary react on the migration crisis? A what myths are currently related to migration in those countries? New blog by Christian Kvorning Lassen. 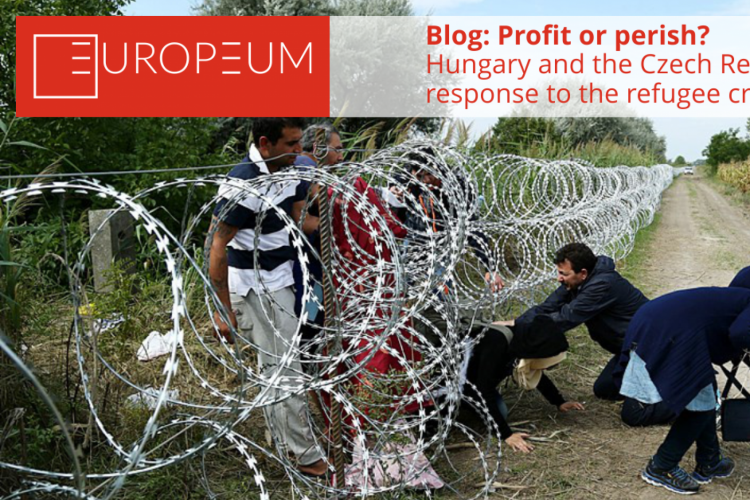 The escalating Syrian refugee crisis highlights the disparities between those countries that welcome refugees and those that do not. Similarly, rifts widen within countries on the issue, causing internal division and debate on how to tackle the influx of refugees. Perhaps President Zeman’s recent derision of what he calls the “Prague café community” for supporting migrants should be seen in this light, claiming that the migrant crisis, through anti-immigrant sentiments, unifies Czech society. The veracity of this claim is debatable, yet it is indisputable that anti-immigrant sentiments are prevailing in the Czech Republic. In this regard, the Czech Republic resembles the remaining V4 countries despite the fact that the V4 are amongst the countries taking the fewest refugees in all of Europe, particularly when viewed relative to population.

This conundrum begs the question of what the root causes to the Czech and V4 anti-immigrant sentiments and President Zeman’s vaunted unity are. In order to evaluate this, it is necessary to put the migrant crisis into perspective and confirm or debunk some of the common misconceptions surrounding migrants.

Economic migrants or refugees?
It is a common misconception that refugees are predominantly economic migrants. Slovak Prime Minister Robert Fico, without citing credible sources, has claimed that 95% of all refugees are economic migrants. This is factually wrong. According to the UN, 62% of all migrants reaching Europe by boat this year were from Syria, Eritrea and Afghanistan, all countries suffering from war, dictatorial oppression and/or religious extremism, meaning these people almost always have the legal right to refuge in Europe. Adding refugees from parts of Nigeria, Darfur, Iraq and Somalia, the percentage of legitimate refugees become far higher. It is a myth that the majority of migrants are economic migrants.

Europe being overrun by refugees, straining infrastructure and social systems?
The EU boasts a total population of more than 500 million people. The UN has estimated that 850.000 refugees will be arriving in Europe in 2015 and 2016. This is little more than 0.1% total population increase. Although this estimate is likely to be exceeded, the amount of refugees would still be miniscule and manageable as not everyone will be eligible for asylum.

Furthermore, considering the disproportionate amount of refugees taken in by countries such as Germany and Sweden, the spread of refugees is incredibly uneven across Europe. The coming refugee quotas will do little to change this. The 4306 refugees the Czech Republic is set to take will constitute a population increase of 0.04%. Considering the Czech Republic’s lack of refugee intake in the past several years, the argument that refugees constitute a cultural threat or unsustainable burden economically and on the country’s social system is unfounded.

The problem can be solved at its root by providing aid to the Middle East at the expense of taking in refugees?
Another popular claim expounded by populist politicians across Europe is that help should be provided to the neighboring countries so that they can take in additional refugees and thus stem the tide of people immigrating to Europe. This argument is fallacious.  Lebanon, a country of 4.4 million people, has taken more than 1.1 million Syrian refugees. Turkey has taken almost 2 million. Jordan has taken over 600.000 Syrians. Coupled with the Somali, Iraqi and Sudanese refugees residing in the country, Jordan is similarly strained. The Middle East suffers from a refugee crisis. Europe does not.
Furthermore, neglect on funding vital humanitarian agencies such as the UNHCR has forced said agencies to make cuts in basic amenities, such as sanitation and food rations, in refugee camps in the Middle East. Is it any wonder, then, that refugees brave the Mediterranean for a better life in Europe?

Based on the above stated, it can be extrapolated that the widespread anti-immigrant sentiments amongst Czechs are not rooted in personal experience. Furthermore, emigration coupled with demographic development necessitates an influx of young people from a long-term perspective, making the resistance to immigrants even more puzzling. Looking at domestic politics within Hungary and Czech Republic, however, provides ample motives for encouraging and engendering anti-immigrant sentiments.

Domestic political success through abject failure
Before the refugee crisis truly escalated on the Serbia-Hungary border, President Orbán and Fidesz’s two-thirds majority was slipping. The party had been hit by a series of corruption scandals, had made some unpopular decisions sparking large demonstrations, and was losing local elections. The main beneficiary of this slide was the far-right party Jobbik.

However, with the refugee crisis’ escalation, Orbán has begun a series of measures of dubious effectiveness; building a fence worth hundreds of millions, which needs military protection as it is vulnerable to a simple wire-cutter. Moreover, the fence needs legal protection. A Fidesz-Jobbik parliamentary majority passed a new law allowing the government to declare a state of emergency in the case of mass migration (more than 500 arrivals a day). The idea was to circumvent international law on refugees. If refugees can be turned into criminals, their rights can be denied. However, when roughly 7500 refugees arrive daily, putting even a fraction of them on trial, which necessitates translators and interpreters of legal documents, rights of appeal, is impossible, particularly if it is to happen at the border.

Refugees are still streaming through, despite assistance from several countries, including the Czech Republic, in patrolling the fence. Perhaps this can be attributed to the sheer number of refugees, yet Hungary’s refusal of help from international organizations such as the UNHCR seem to indicate otherwise. Given the fact that Hungary at the onset of the Ukrainian crisis proclaimed it could accommodate up to 170.000 refugees, the change of tune one and a half year later seems even more odious.

In terms of stopping refugees, the fence is a failure. In terms of domestic politics, however, it has proven incredibly successful; Fidesz’s numbers are up, having completely blindsided Jobbik. 82% of the population supports Fidesz’s measures. Orbán is portrayed not only as the defender of Hungary but also of Europe because he took action while the EU hesitated.

In the Czech Republic, similar developments, although to a lesser extent given the absence refugees, has occurred. According to CVVM and STEM polls, President Zeman and Andrej Babis, two of the most vocal exponents for anti-immigrant sentiments and the EU solutions proposed so far, has both seen a strong surge in popularity since they began fanning the flames of nationalism against refugees. Yet the crisis has no national solution. Only the EU can solve it.

Conclusively, the anti-immigration sentiments engendered by populists are ignorant at best, cynical opportunism to strengthen their domestic political position by profiting from a tragic situation at worst.

Text has been originally published at blog iHNed.cz (in Czech language).