We invite you to the EU debate ± on the National Recovery Plan presented by the Czech government in April this year. The debate is organized with the support of Jean Monnet Chair TeDEUSS - Teaching and debating EU small states' security at FSV UK and co-financed by the European Union's Europe for Citizens program. 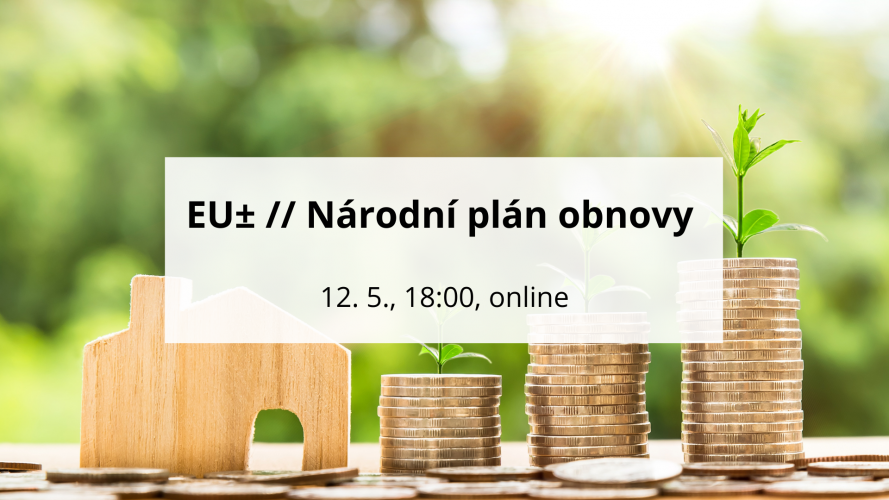 At the beginning of April, the Czech government presented the National Recovery Plan, which represents a comprehensive strategy for the use of 172 billion crowns from the Next Generation Fund of the EU. The money will need to be used quickly over the next five years, which in practice means that a large part of the Czech state's future investments in 2021-2026 will be determined by what the government has decided to support under the National Recovery Plan.

Although it is a huge package of money - about 13% of the annual Czech state budget - it has not been talked about much so far. Only sporadically has there been criticism that the plan focuses too hard on hard projects, blends revenue gaps in the state budget, and ignores investment in the knowledge economy. Others, on the other hand, praise the plan by helping to reduce greenhouse gas emissions and support the Czech rail and digital infrastructure.

What projects will be supported under the National Recovery Plan? Does the plan respond to the challenges facing the Czech Republic? And what does the post-covid recovery plan mean politically for EU cohesion?

⦿ Jitka Savin - Deputy Director of the Department of European Affairs and the Internal Market, Ministry of Industry and Trade (TBC)

The debate will be held in Czech language and is organized with the support of Jean Monnet Chair TeDEUSS - Teaching and debating EU small states' security at FSV UK and co-financed by the European Union's Europe for Citizens program. You can watch and participate on Wednesday, May 12 from 18:00 on our Facebook, or later from the recording there.