On Wednesday, November 2 we organised a debate on the topic of crossborder cooperation within the migration crisis in Central and Easter Europe. The report from the debate is now available. 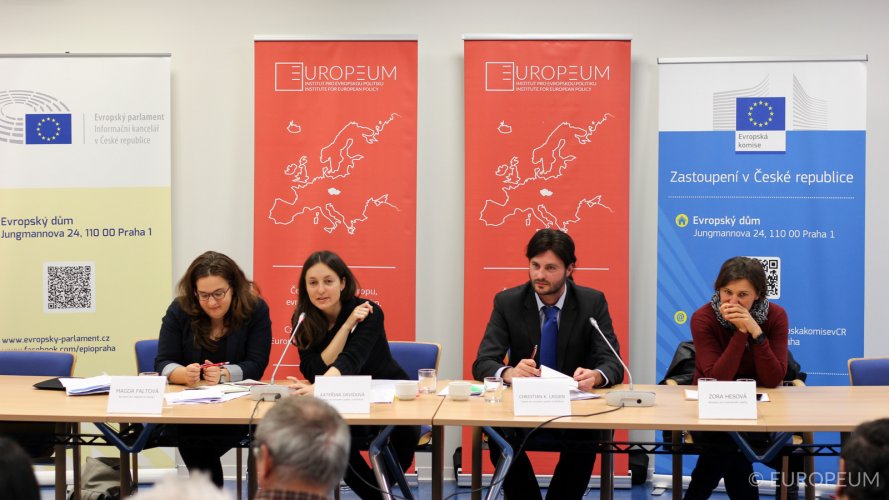 After introductory remarks and a short presentation of the speakers by Kateřina Davidová, Christian Kvorning Lassen kicked off the debate by stressing the nature of the issue:

Migration is something that we are likely to see growing, therefore integration is crucial. Unfortunately, the V4 countries yet lack proper integration frameworks.

,,Migration put into a security perspective and propagated by the media and politicians is one of the reasons of our reactive attitude towards it’’, he added, following up with explaining that media literacy on migration needs to be improved within the V4 countries by diving deeper into the issue and offering successful, individual stories.

It is important for the media to rather develop a proactive attitude towards migration instead of their current, reactive one.

Christian Kvorning Lassen concluded, adding that as crossborder cooperation remains an unexplored area, and establishing an informational hub for the civil society would be a crucial step for further prospects of cooperation.

cooperation between civil societies in the V4 region existed even before the migration ‘crisis’, but it is now being challenged.

Comparing the Czech Republic and Hungary, she presented the Czech model of integration as better than the Hungarian one, where integration policies were completely cancelled. ,,For example, in Brno a programme for refugees was set up and it presented a strong position on integration for quite a large number of refugees.''

There is a lot to be done and al lot to be learned, especially in the cooperation between ‘transit’ and ‘hosting’ EU countries.

Zora Hesová agreed on the reasonable need for proposals of a deeper public discourse on migration, as well as suggestions of counter-narratives.

she explained, adding that ,,working conditions of NGOs and civil societies are crucial to a possible joint cooperation’’. She stated that she felt as the society lacked a sense of larger reality, apart from the unfortunately rather simplistic interpretation of last year’s events.

The debate was organised in co-operation with Österreichische Gesellschaft für Europapolitik (ÖGfE).